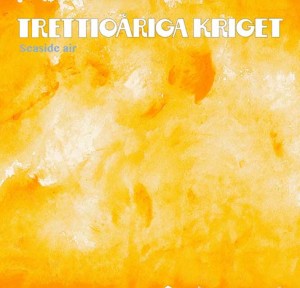 Mixed by Dag Lundquist in November 2015 to January 2016.
Mastered by Peter In de Betou at Tailor Maid Production, Stockholm, Sweden in January 2016..

“Seaside Air”, the new studio album by Trettioåriga Kriget, was recorded during summer and autumn 2015 in Stockholm. It contains seven new original songs, most of them written by Stefan Fredin and all with lyrics by Olle Thörnvall. For the first time in the long history of Kriget, the entire album is in English.

THE PHOTOGRAPH
Music by Stefan Fredin
Lyrics by Olle Thörnvall

In the distance, very small
stands a boy who holds a ball
but we don’t know what he thinks about it all

Just around the railroad bend…

Down to the station a bellboy has been sent from the Grand Hotel
He carries luggage until his back is bent at the Grand Hotel
Now he’s on tiptoe in a uniform that’s up to date
Although he’s gone since long ago, forever here he’ll wait

Just around the railroad bend…

Now what is and what has been
still don’t say what it all means
so your questions won’t be answered, so it seems
But the photograph will keep
this one summer fresh and neat
like a dream you might have dreamt once in your sleep

Gulls sailing in the blue
girls in the distance, too
while the music that we shared
floated in the seaside air –

Forgotten garden
young love within
Another day
gone for a swim

Forgotten garden
the path, the moss
The joy of living
and then the loss

-Just below in the old house
we have gathered as guests
drinking beer, talking music
while I hide my unrest

Flickering flames, walls are creaking
while the snow blows around
In my soul there´s a blizzard
In the end I´ll break down-

See the house grow dim with time
Piled-up drifts, an all-night storm
In the silence we walked home
in the first grey light of dawn

I was trying to find you, Billy
a day when the wind blew cold
down by the Liverpool docks
where you once worked, I’m told

Afterwards, at my hotel
a city map spread on the bed
to see if you’ve been marked out
somewhere with a dot instead

A pre-Beatles teenage star
Britain’s Elvis, that’s you
Your smile was as tough as his
you sang quite alright, too

Now you’re almost forgotten
That’s the way time lets you down
But your statue, I’ve heard
is still somewhere here around

– When you were young, did you
walk the quays
see the fog on the Mersey rise?
When you worked on the tug-boat
and smelt the breeze
were you dying to change your life? –

So I finally met you, Billy
as a sculpture with arms stretched
wide
down by the Albert Dock
as the sun burst forth in the sky

Yes I finally met you, Billy
as a rocker with arms stretched wide
and daffodils strewn at your feet
while the river just flowed on by
Play it cool…

Palinurus, are you there?
Can you hear me through the air?

Palinurus, far or near
can you still recall the fear?

The sunny pines were not for you
Can you believe I was there too?

Palinurus, can you feel
you’re a shadow, yet you’re real?

The sunny pines…
And I saw…